I’ve had many weddings where I setup a photo booth with a camera on a tripod and someone behind the camera ready to press the shutter release. Well I decided to craft my own DIY unmanned photo booth. Well I soon found out that It sounds a lot more simple than it really is. I first started with many Google searches and got many hits with great step by step diagrams and outlines crafted by photographers much like myself.

My goal was to setup something which was self inclosed and included a monitor for photo booth live view, a push button with a count down, and the possibility of live social sharing (waited for version 2.0 for this requirement). 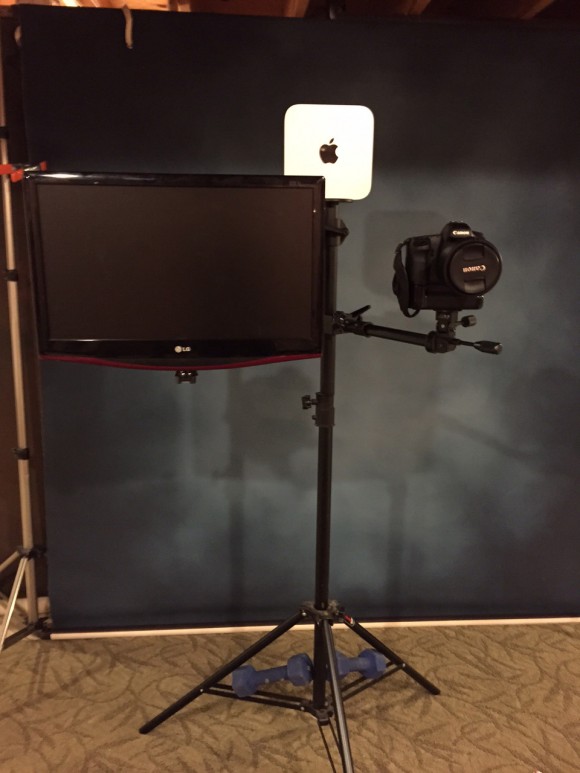 And here’s a quick pic of the booth the night before it went out with me to one of my best friends weddings. And so now I also get to share with you the brides perspective of how a photo booth comes to life. Thanks Alicia for helping me make my photo booth version 1.0 possible and I now know what sort of changes I need to make for photo booth v2.0!

If you’re reading this than you may be in the throes of your own wedding planning escapade. Or perhaps you’re a fellow voyeur of wedding photos. Even better, you may just like Dan Reade. However you found yourself in this little corner of the interwebz, I promised Mr. Reade I’d jot down a few words on photo booth backdrops… so you’re welcome. Or I’m sorry. Whichever is more appropriate by the time you get through this gem.

I’d really love to share a dramatic and interesting tale of backdrop making. How I spent hours researching prehistoric Asian paper making and forming the pulp with my own two hands, or scouring flea markets for the perfect antique white doily. I debated all those things. Very seriously in fact. Pinterest does that to a gal and I’m quite crafty. But let’s be real, I’m planning a wedding and I got shit to do. I also volunteered to plan two other events for some local nonprofits in addition to my full time job, which forced me to reprioritize my desire for an insanely artsy and Instagram worthy backdrop.

Let’s walk through my progression…

It’s beautiful, and totally do-able. My pre-wedding planning self would have snorted in derision at someone who wouldn’t take on such a simple project. But I’m pretty lucky in that I know myself fairly well, and just don’t have the patience to make a million of those flower/coney things. (And I also recognized the look of fear in my fiance’s eyes when I showed him, he knows me too.)

Then I lowered my high-falutin, artsy standards a bit and set my mind on something like this.

Totally manageable. BUT WOULD I LIKE IT! This is the crux of it all, MAKING A DECISION. I’m not typically the indecisive type, but there’s so much freaking pressure to do this thing right. (Note: I did not say perfect. Hell, my Type A, Virgo self would never get a wink of sleep if I allowed myself to attempt perfection.)

You know how Coco Chanel told the world to take off one piece of jewelry before leaving the house? Let’s pretend I did that. With the clock running out, and my interest waning, I chose a simple aesthetic. This guy caught my eye. I’ve made this garland before, in fact hundreds of yards of it. (do. not. ask.) 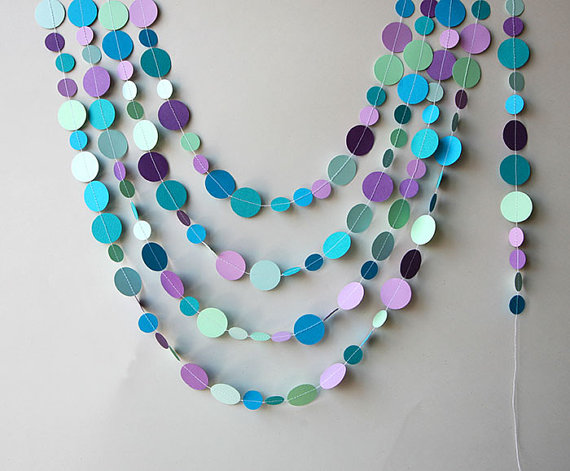 So that’s what I did. I punched out hundreds of black circles whilst watching the Golden Girls and Top Gear, and then spent an hour running them through my sewing machine using black thread. Dan thought I was crazy to go the black on black route, and his concerns were totally valid. Something more dramatic would have been fabulous—gold thread? pink and red circles? fringe?!—but in the end I wanted the awkward shenanigans of my guests to be the star of the booth. And I assure you, they were. 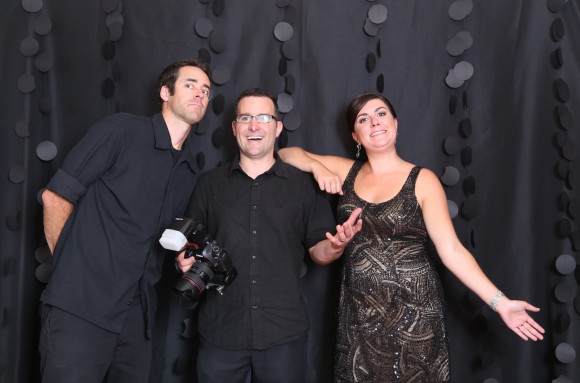